“If you are lucky enough to have lived in Paris as a young man, then wherever you go for the rest of your life, it stays with you, for Paris is a moveable feast.”

We were having such an incredible time on our two week road trip through Northern France, and we continued on to the City of Lights: Paris, France.

We woke up in Bayeux, France, about two and a half hours from the Palace of Versailles and made our way to visit the Palace before spending the rest of our trip in Paris. If you decide to take a similar trip you could stop at Château Gaillard (Les Andelys), Richard the Lionheart’s castle, on the way to The Palace of Versailles. The Château is open everyday, except Tuesdays, from 10:00am-1:00pm and 2:00pm-6:00pm. There are two tours you can choose from: €3.20 for unguided and €4.50 for the guided tour. Alternatively, you can drive by it because the outer area is free to visit. We decided to skip it due to time constraints and made our way straight to the Palace.

We planned the Palace of Versailles as a stop on our way back to Paris because it was about an hour and a half from where we were staying. You can definitely take the subway from Paris to the Palace, but since we had the car for one last day it worked out well. After our visit at the Palace we dropped our luggage off at the Airbnb and then to drop the car off at the airport. We took the subway back into the city.

As I have written previously, my first suggestion when visiting big cities is to look into the city/attraction passes. We have purchased city passes in several places (Boston, Philly, Rome, Naples, London, and more I am sure) and they are totally worth it if you plan to visit several places each day like we do! For this trip we purchased the Paris Passlib. This particular pass is €62 per person for a 3-day museum pass which includes unlimited attractions, and a fast pass to many of them. We also chose to add on the subway transportation card for about €42. In order to determine if a pass like this is worth it, I usually select all of the attractions I want to visit, then realistically choose the ones I could actually fit in the itinerary, and add up the admission prices…and it is always worth buying a pass. The other great thing about these passes is if you find yourself near an attraction with time to kill, you can often get more use out of your pass than you expected. We also purchased 2 days for the Big Bus tour, that includes a boat cruise on the Seine, and a bus tour at night which was about €59.

Pro Tip: add the pass app to your phone! See why I suggest this in the 3-days in London Post.

Since there is so much to see and do in Paris, there was no way we would be able to do everything we wanted. Below I outline what we were able to fit in, some additional suggestions that we still have on the list for the next time we visit, and some great places to eat! Be sure to note the hours of operation of the museums, many of them are closed on certain days of the week.

View the map above for a view of the places to visit in a single day.

On our third day in Paris we got up early to catch the metro across town to get breakfast at a bakery before meeting the bus to visit what I kept calling Champagne World! This is what I affectionately called our day trip into the Champagne Region of France where we visited several champagne wineries, and the name kind of stuck.

On the fourth day we took the Hop on- Hop Off Bus (Day 1). You can stay on the bus and it will take your around the city in about two hours and twenty minutes if you ride straight through, or hop off anywhere you’d like. I have found that the Big Bus company overall has been way better in my experiences when compared to CityBus and other local services. These passes are great because buses come every 5-15 minutes, and you can track them by downloading the app. We rode the bus to the following locations and hopped off to visit:

The rest of the afternoon was spent meandering through the following museums and riding the remaining portion of the bus route, which is a great way to see the city while resting your feet!

After dinner at La Briciola (This was probably in the top five best Pizzas I have ever had- and we had pizza daily when we were in Italy), we ended the night with the “Paris at Night” Bus Tour that departs at 9:15pm from Champs-Elysees (Bus Stop 8) and lasts two hours. There were two really great parts of this night tour: 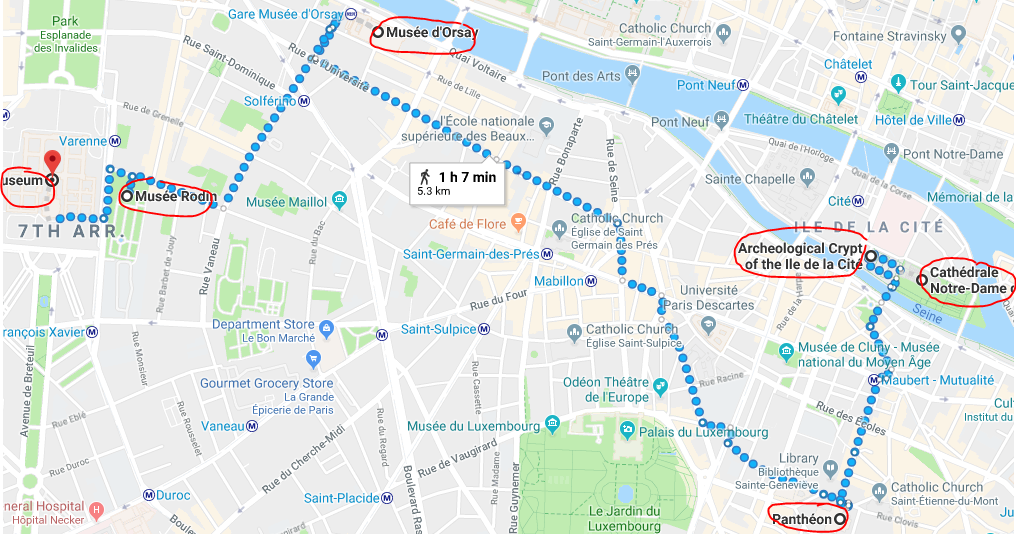 On our last full day in Paris we had our second day for the Hop on- Hop Off Bus, so we hopped on our way to Montmartre. This neighborhood, located on a hill is one of the highest points of Paris, is famous for the artistic history: it was home to Picasso, Monet, Van Gogh, and many other artists. The entire area is beautiful, each of the small streets and each building is gorgeous. When I move to Paris, this is the arrondissement where I want to live. It is also home to the magnificent Basilica Sacré-Cœur. Here you can see amazing views of Paris from a very different angle that complements the views you see from Notre Dame and the Eiffel Tower. While visiting Montmartre be sure to check out these places:

So you are probably wondering about our visit to the Eiffel Tower? Yes, we had seen it here and there when exploring Paris, but it wasn’t until the last full day in the city that we actually had tickets to go inside the tower. There are three different levels you can visit depending on your interests. We decided on the middle level. We had tour tickets for 3:30 in the afternoon on mine and Andrew’s 10-year dating anniversary, so we decided to splurge on overpriced champagne and macaroons- a great way to celebrate! Near the Eiffel tower you can also check out the Mini Statue of Liberty, relax or picnic at the Champ de Mars, and visit Trocadero Palace. 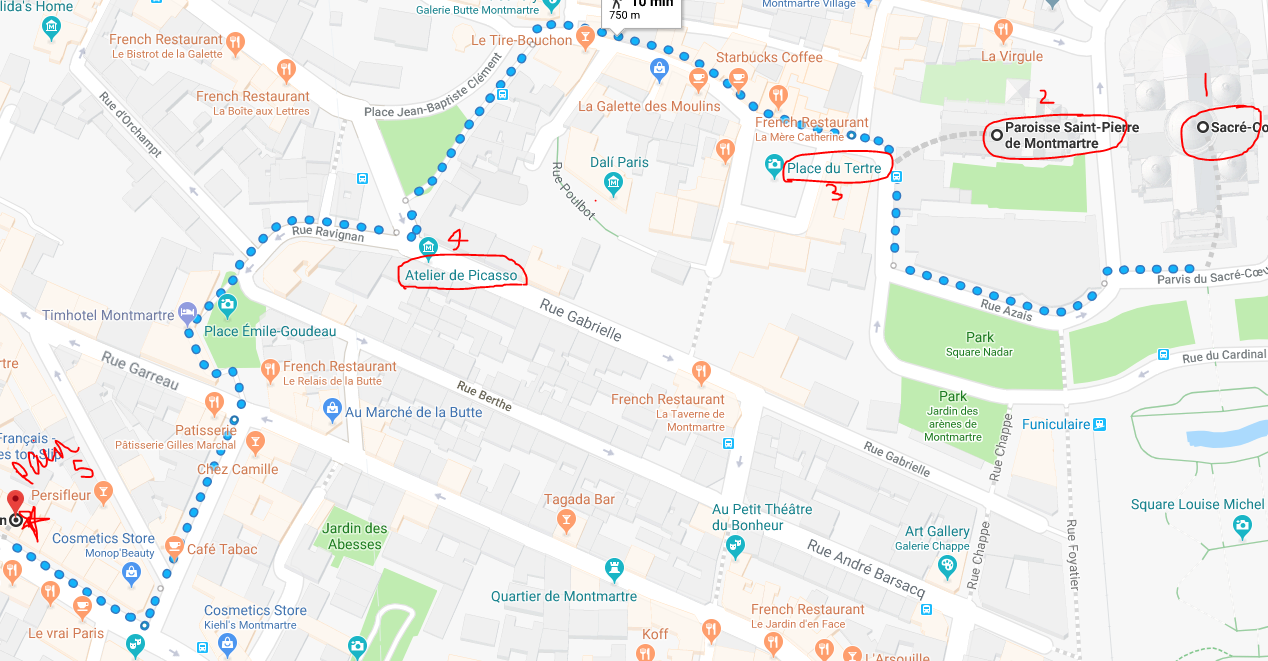 After an exciting day in Montmartre and visiting the Eiffel Tower we took the one hour River Cruise that was included with our Bus tickets. It departs from the Eiffel Tower (Bus Stop 8) every 30 minutes starting at 10:00am, and the last tour is at 10:30pm. We had a nice time just floating along the Seine and observing the passing city.

Andrew’s bucket item was to go to a Michelin Starred restaurant while in Paris, so on our last night he made reservations at Saturne (which is now closed). We had an 8-course meal that was prepared by the chef and each course was a total surprise. I ate so many things that night that are typically not in my diet, like pigeon for example (which are giant by the way)! This was totally out of my comfort zone, but was such a fun experience! See the 8 courses below:

On our last day in Paris, Matt and Janick left pretty early and me and Andrew had the day together. We first visited Stohrer, which is the oldest patisserie in Paris (est. in 1730), and explored Montorgueil (a street lined with markets). Along the way we picked up a baguette and a bottle of cidre here, and meat and cheeses there, and made our way to have a picnic on the Seine (my bucket list item). We also stopped by the famous Laduree (several locations throughout Paris) for macaroons. It was the perfect Parisienne morning, and a perfect way to end our trip.

There are so many other streets in Paris that were left to be explored. Rue Cler is a street area near the 1st and 2nd arrondissement with markets and cafes, and Le Marais spreads across the 3rd and 4th arrondissement. I read that both of these locations are great places to visit. After our picnic on the Seine River is was that dreaded time of heading to the airport. We scheduled a shuttle to for convenience and time sake.

Things to Eat in Paris:

The Paris Pass is beyond worth it! There are so many museums and attractions included in the city as well as the surrounding area. Here is the list below, with the arrondisment where it is located. We also made stops into places that were on the list that we happened to be nearby that were not on the schedule if we found ourselves with extra time.

Below you will find a neat graphic that shows the various points of interest and which arrondissement in which they are located. We stayed in La Defense our first night in Paris before we explored the northern part of France. When we returned to Paris we stayed near the 10th arrondissement in an Airbnb. This Airbnb was in a kind of sketchy neighborhood (which I was prepared for because of the reviews, but it was just fine since we were only there to sleep and shower) but very close to a metro station which was perfect for getting around.

So what did we miss? I know we missed a lot, so I will keep a running list of things to see, do, and of course eat, for my next visit to the city of lights.